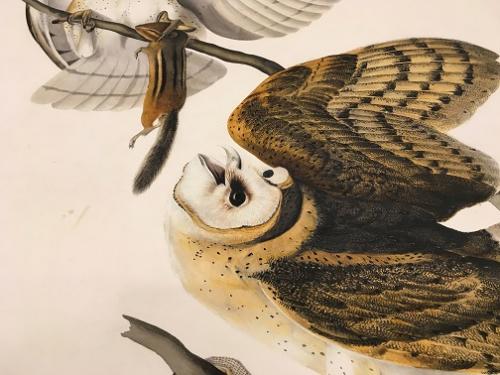 In 1827, when his initial arrangement with a Scottish printer dissolved after only ten plates had been completed, Audubon entered into a new collaboration with London printer Robert Havell and his son, engraver Robert Havell Jr. Initially, the younger man engraved the copper plates and his father oversaw printing and coloring. After his father’s death in 1832, Havell Jr. managed all aspects of the work. By 1838, 425 individual images had been engraved, printed, and hand-colored in editions of roughly 200 plates. Robert Havell Jr. was already a well-respected artist when he met Audubon and it is clear the naturalist had great confidence in his engraver. The painting and plate of the Barn Owl demonstrate that Audubon trusted his collaborator to represent his paintings of birds exactly and to occasionally supply a beautiful and appropriate background for the featured creatures. 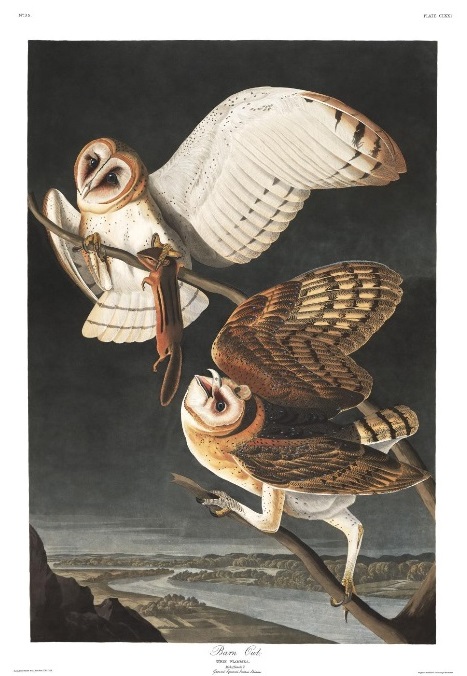 This species is altogether nocturnal or crepuscular, and when disturbed during the day, flies in an irregular bewildered manner, as if at a loss how to look for a place of refuge. … Its hearing is extremely acute, and as it marks your approach, instead of throwing itself into an attitude of defense, as Hawks are wont to do, it instantly swells out its plumage, extends its wings and tail, hisses, and clacks its mandibles with force and rapidity. If seized in the hand, it bites and scratches, inflicting deep wounds with its bill and claws.… When kept in confinement they feed freely on any kind of flesh, and will stand for hours in the same position, frequently resting on one leg, while the other is drawn close to the body. In this position I watched one on my drawing table for six hours.