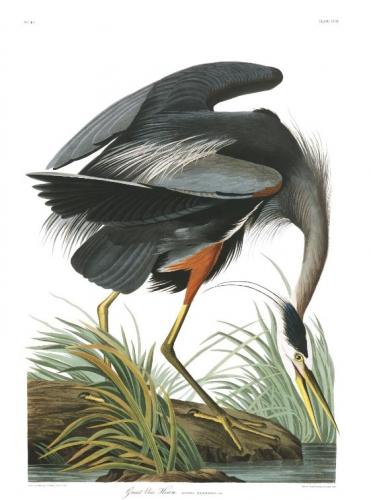 From his earliest conception of The Birds of America, Audubon intended that each bird would appear life-sized and, in some cases, alongside plants, wildlife (including other birds), and other environmental elements. Audubon’s vision of active representations of wild birds in their habitats set The Birds of America apart; it also presented challenges. To accommodate the largest American birds, the copperplate etchings derived from Audubon’s original paintings had to be printed on “double elephant folio” paper (approximately 38 x 26 inches), the largest sheets available. Even this exceptionally large page wasn’t always big enough—the grandest birds seem a bit cramped! Due in part to the size of the individual plates, Audubon struggled to find collaborators to take on the work of etching and printing. In addition to logistical challenges posed by the page dimensions, the work’s format made some potential engravers and printers doubt that Audubon would secure the subscriptions he required to fund their work. Archival records show that some 300 subscribers eventually signed up to receive five plates at a time, several times a year. Each installment included three small birds, one medium-sized bird, and one large bird. Audubon and his collaborators supplied a title page for each group of 100 plates (134 in the case of the final group) and many subscribers had their prints bound in four volume sets. The total cost for the 434 plates and Audubon’s accompanying text, the five-volume Ornithological Biography, was about $1,000–approximately $25,000 in 2017.

Extremely suspicious and shy, this bird is ever on the look-out. Its sight is as acute as that of any Falcon, and it can hear at a considerable distance, so that it is enabled to mark with precision the different objects it sees, and to judge with accuracy of the sounds which it hears. Unless under very favourable circumstances, it is almost hopeless to attempt to approach it. You may now and then surprise one feeding under the bank of a deep creek or bayou, or obtain a shot as he passes unawares over you on wing; but to walk up towards one would be a fruitless adventure. I have seen many so wary, that, on seeing a man at any distance within half a mile, they would take to wing; and the report of a gun forces one off his grounds from a distance at which you would think be could not be alarmed. When in close woods, however, and perched on a tree, they can be approached with a good chance of success. READ Audubon’s full text at Audubon.org

Brown Pelican
From Ornithological Biography, or, An Account of the Habits of the Birds of the United States of America, by John James Audubon, 1831

The flight of the Brown Pelican, though to appearance heavy, is remarkably well sustained, that bird being able not only to remain many hours at a time on wing, but also to mount to a great height in the air to perform its beautiful evolutions. Their ordinary manner of proceeding, either when single or in flocks, is by easy flappings and sailings alternating at distances of from twenty to thirty yards, when they glide along with great speed. They move in an undulated line, passing at one time high, at another low, over the water or land, for they do not deviate from their course on coming upon a key or a point of land. When the waves run high, you may see them “troughing,” as the sailors say, or directing their course along the hollows. While on wing they draw in their head between their shoulders, stretch out their broad webbed feet to their whole extent, and proceed in perfect silence. READ Audubon’s full text at Audubon.org